Some of my favorite anime is my hero acedemia, naruto, and the disastrous life of Saiki K. They have really good plot and they have lots of exciting new ideas and concepts that draw in the watcher/listener, they also are very fun to watch and you can binge watch them without getting bored! now that I’ve told you what my favorite anime’s are and what I think about them, I will now explain what the anime’s are about and why I like them specifically.

Starting off… My hero acedemia! So this anime is set in a world where 80% of the world’s population has an uncanny ability called a quirk, and some people stepped up and became heroes, All Might is the #1 hero, the Symbol Of Peace for all of Japan. The main character is a green haired boy named Izuku Midoriya, He is a complete nerd about heroes and is obsessed with them. The story starts with young Izuku, he is watching a video of all might saving people and saying his signature catchphrase, “Everything is fine now, because I am here!” Young Izuku wanted to be just like all might, when he turned 5 and still didn’t get a quirk, his mother took him to the doctor, the doctor looked at Izuku and took some x-rays. Unfortunately Izuku didn’t get a quirk, that was very heartbreaking for Izuku. -FASTFORWARD A COUPLE OF YEARS WHEN IZUKU IS A TEEN- The day has started, Izuku went to school and his childhood friend/enemy/bully Katsuki Bakugou walked up to him, Katsuki had a quirk, a very powerful one. His quirk is called explosion, the sweat of his hands works like nitroglycerin which causes the explosions, Katsuki walks up to Izuku and starts bullying him because he doesn’t have a quirk and he finds it stupid that Izuku still wants to be a hero. Izuku is walking home when a villain appears, the villains quirk was one that turned his body into a sludge, the villain trapped Izuku in the sludge, he struggled to breathe as the villain was going down his throat and suffocating him, just then Izuku’s vision starts to go dark. Just before he blacks out, he sees a shadow, the shadow punches the sludge villain and the villain goes flying. When Izuku regains consciousness, he finds out that the #1 hero All Might was the one that saved him, Izuku jumps up and thanks All Might a million times, and just as all might jumped away, he found that Izuku had clung onto him. All might set Izuku down on a nearby building, Izuku then shouted… “can I be a hero like you! even if i dont have a quirk!” all might was

shocked… to be continued next time! bye! 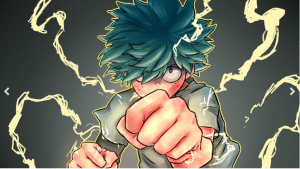